Dispatch News.
Raipur. Chhattisgarh Chief Minister Bhupesh Baghel said on Tuesday in a strong message that the central investigative agencies must be prepared for retaliatory action if they harass people here, as reported. Bhupesh Baghel said that he learned that people from IT, ED, and DRI are calling people here and threatening and harassing them. “We will take action against the agencies if the Chhattisgarh government receives a complaint,” he said.
The Chief Minister said the central agencies have deviated from their objectives. They are not even following the oath taken under the Constitution of India. “We said here that chit fund companies have looted six and a half thousand crore rupees. Somewhere there has been money laundering. What action is not being done in it?” he stated.
Bhupesh Baghel attended the birth anniversary celebrations of Agrasen Maharaj organized at Agrasen Bhawan, Sector-6, Bhilai. On the stage, some members of the society complained that the central agencies were harassing them unnecessarily. They are sometimes called and intimidated. Later in his speech, Chief Minister Bhupesh Baghel stated that the central government, through its agencies, is instilling fear. If the Central agencies harass someone unnecessarily and a businessman complains to the police station, the police will act. 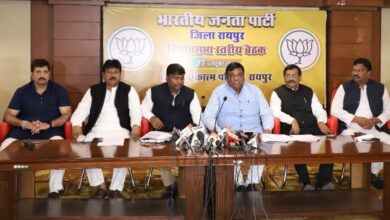