In Chhattisgarh, the police have, once again, caught a huge consignment of ganja. The police have seized ganja and vehicles worth more than Rs 4.5 crore from Gaurela-Pendra-Marwahi (GPM) district. The police have arrested nine accused in different cases and recovered 22.40 quintals of ganja.

The police had received information that Girish Yadav, a resident of Marwahi, smuggled ganja on a large scale. He brings ganja from Odisha and sells it in different areas of Madhya Pradesh and Chhattisgarh. That’s why the search was on for him.

On Sunday, the police saw a truck coming from the Bilaspur side and stopped it. They found Girish Yadav in the same truck. During interrogation, he said that he was bringing cement dust from Odisha with his partner Firoz Khan. In such a situation, the police searched that truck. On searching the truck the police found sacks of ganja under the cement dust. A total of 20 quintals of 30 kg ganja were in these sacks. The police have confiscated the ganja and the truck. In total, the police have seized goods worth four crores in this case. The second accused in this case is a resident of Odisha.

Similarly, Pendra Police has also taken action. Pendra Police has arrested an accused from Anuppur. This accused was going towards Madhya Pradesh with two quintals of ganja in a luxury car. A total of 45 lakh 5 thousand goods, including ganja, have been seized by the police from him. The police have named this accused as Daulat Kenwat (41).

The Marwahi police have also caught six accused while taking action. These sumo vehicles were trying to smuggle ganja. The police have seized 10 kg of ganja from them. The cost of which is Rs 2 lakh. The police have arrested Ramkumar Patel, Shankar Chauhan, Lakhan Kashyap, Shiv Kailash Sahu, Visas Sahu and Bablu Kumar Sahu in this case. All of them are residents of Janjgir and Balodabazar.

The police have taken all this action in the last two days. The district’s SP Trilok Bansal disclosed this on Monday. In all three cases, the police seized 22.40 quintals of ganja. In total, the police have caught goods worth four crores, 67 lakh 77 thousand. 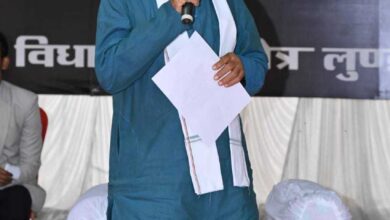